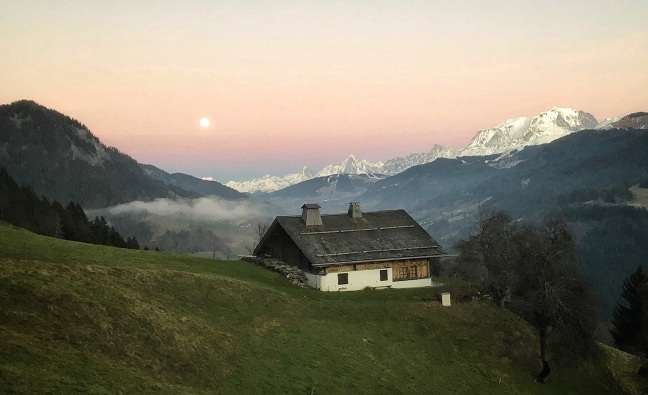 We hardly ever listen to the sound of a dog’s bark,
or to the cry of a child or the laughter of a man as he passes by.
We separate ourselves from everything, and then
from this isolation look and listen to all things.
It is this separation which is so destructive,
for in that lies all conflict and confusion.
If you listened to the sound of those bells
with complete silence, you would be riding on it —
or, rather, the sound would carry you
across the valley and over the hill.
[…]
Meditation is not a separate thing from life;
it is the very essence of life,
the very essence of daily living.

~ J. Krishnamurti (‘The Only Revolution’)

Suggestions:
– Beauty in Essence (other pointers from the blog)
– A Day at Brockwood Park (Homage to J. Krishnamurti)

Krishnamurti said it in very clear, unmistakable terms nearly a century ago. So did the ancient sages of India, the early Sufis, the original Zen masters of China, and the great Meister Eckhart, all in their own way. So there is no room for confusion anymore. Cease being entangled in your own, unfounded beliefs. Stop breeding and comforting them by thinking them out, perceiving them away, and feeling them in, therefore giving them a reality of their own. Be reasonable for once. All this ceaseless activity must come to an end. Remember what Krishnamurti said in such irrevocable terms.

Stop giving the world a reality of its own by pushing it at a distance from yourself. It will make you retreat in your body, where you will feel small, unsafe, required to manage a universe, and make impossible choices. Stop thinking to be your body only, squeezing your self in such pitiful way, bullying it, hurting it to the point where it is made unhappy and careless, fearful and resentful, its original innocence and beauty transformed into some hideous thing. All this could be avoided in one single glance and action, if only we had truly listened …

“The very fact of being aware of what is is truth.”
~ J. Krishnamurti

If you observe yourself carefully, awareness can be felt as a truly overwhelming presence. It is actually all there is, and that can be easily proved. Let’s take an experience like our current experience, since no other than this one present, living experience, has ever existed and will ever do. We cannot divide experience, make it into bits and pieces to be compared or analysed. Experience is not limited to its content. You cannot separate content from its recipient. That’s the first clue for our investigation: Experience is undivided, unbroken awareness.

But let’s not be too quick on this, and jump to an easy conclusion. Let’s look thoroughly at our experience. What are the things that occupy us? What is actually filling this presence of ours? Let’s take our thoughts for example. There seems to be a steady arrival of them in our mind. All kinds of thoughts. The organised ones and the messy ones. The scared, confused, barely audible ones, and the vindicative ones. The happy ones and the weeping ones. Some that are useful in the course of a day, and others utterly useless and gratuitous, that are here solely to soothe our broken sense of self, or escape from a dreadful, imagined reality. Let’s face it: most of our thoughts are actually mad thoughts owned by a barely identifiable owner.

I would like to live the incidental life. Not the one that is a toil. Not the one that finds its significance in happenings and accidents, in various changes or transformations, in happy or sad expressions. I don’t want to be dependent on the forms of life for my happiness. I don’t want to be bound to its many injunctions, be they ones that are imposed or desired. For this is how life acquires its tragic quality. This is how life becomes something that we have to endure or bear with. Something that we have to go through with clenched teeth — which is with hope and belief. Something that we can be happy with, or grateful for, only if we take the right decisions, make the right efforts, and have some good luck too. I don’t want my life to be so brittle and uncertain. To be so imprisoned in endless causes and conditionings. And to have fear as its background music. No. I don’t want to be so grandiose. I want the incidental life.

To have an incidental life is to forever place our gaze on the horizon of being. This gaze implies surrendering to what is, or not minding what happens, as Krishnamurti once affirmed. This gaze will make you see life as being drenched in beauty and love. And this gaze will render you to your eternal, inborn, given nature of peace, happiness, and freedom. This is when experience clothes itself in a sumptuous dress of truth or understanding. One that will allow you, in familiar terms, to leave your life alone. For it can verily and simply take care of itself. Life doesn’t need your painstaking involvement. It doesn’t fancy your pity or concern or greed. Doesn’t want to be taken advantage of. Let your life be in its right place, which is the place of humility. This is where it will find its true colours and expressions. This is when it will rid itself of all the suffering that encumbered it. This is how it will find its own sacred purpose. Don’t give your life an undue position. Don’t take what is secondary to be foremost. And what is foremost to be secondary. See only being as foremost. This is the sun of life: this being. Its essence and direction. The rest? Well, let it be incidental.

In our language, the word ‘silence’ is defined as the complete absence of sound, or the abstinence of speech. Yet silence has fascinated us beyond these elementary descriptions to evoke the unknown and the mysterious. Something in silence speaks to us, and is a presence beyond its apparent nature as absence. Spiritual teachers from all traditions have abundantly used the word for its richness of meaning and its powerful evocative dimension. So pregnant and profound is this experience of silence that the word has often been likened to awareness or the nature of god’s silent being. Among others, Ramana Maharshi has often pointed silence as being the ultimate teacher in these matters, and Krishnamurti has described it in supremely effective and graceful words just below. This page is dedicated to their many expressions of silence:

“The experience of silence alone is the real and perfect knowledge.”
~ Ramana Maharshi (‘Be as You Are’)

”Accept what comes from silence.
Make the best you can of it.
Of the little words that come
out of the silence, like prayers
prayed back to the one who prays,
make a poem that does not disturb
the silence from which it came.”
~ Wendell Berry

Read these many quotes on silence by various teachers… (READ MORE…)

“The moment I realise I am humanity,
that is the greatest action.”
~ J. Krishnamurti

Why has humanity left this whole field of knowing oneself — all the spiritual endeavour, the extraordinary adventure that it is — outside the conventional and widely accepted way of living? It is a difficult thing to understand, since the door to it is so wide open and evident. Of course, religions are there, and have taken an all too consuming place in the past, but yet to no real avail. For an immense majority of people, religious faith didn’t go very deep, and didn’t put much of a light on the everyday suffering of humanity other than being a widespread system of morals and rituals destined to give some rules to society, and to instil fear, consolation or respect. So why has this understanding been confined to only a few, scattered individuals? Why has it not yet become the one accepted and necessary endeavour of our lives?

Think in terms of flow. Don’t think that you have to exercise control over your life. Who would be this controller? Do you want to go back to the little, struggling entity that feels separate and wants to gain self-worth through control? Control is illusory. It never happens, although we buy the illusion that we are this controlling agent. It makes us feel good for a while. But this is not the truth. And as all untruths must eventually do, it will recede, give up its fake reality in favour of the only one reality there is, which is our own one being. To keep that sense of being in sight is all the control you need. It’s the only control that needs neither a controller, nor a controlled. For the simple reason and truth that the controller is here the controlled, as Krishnamurti so often said. There are not two things that can possibly act on each other, because these two things never acquire any reality of their own. There is only your natural, ever present being, which controls you rather than it be controlled by you. This being is the flow you need to follow. It will take you where you are and where you need to be. It will keep you safe. It will move you in the right direction. You won’t need to exert yourself, or to practice. Efforting will fade away. You will be taken by its flow.

“Meditation is a state of mind in which the operation and exercise of will is not.
It has no direction. It is not seeking any experience. It is no longer seeking at all.
Therefore a meditative mind is free of all control.”
~ J. Krishnamurti (Public Talk 3 Bangalore, 1973)