“I have been an [explorer] and still am.
But I stopped asking the books and the stars.
I started listening to the teachings of my own soul.”
~ Rumi

It is not because I have read a few books, bathed in the presence of some beautiful beings, and participated to many retreats that I know where I am, what I am at, and can now follow the upward course of a promised, enlightened destination. I’m not like an arrow steadily cutting through the air. It’s not like that I’m afraid. I confess: I’m a lost bird. One that’s flapping its wings on the winds of uncertainty, not knowing how, where and what to proceed. I spend all my time in the forest, flying around like a mad bird, thinking that I have one thousand things to do to secure a more decent life for myself. And this is an endless, confusing activity. … 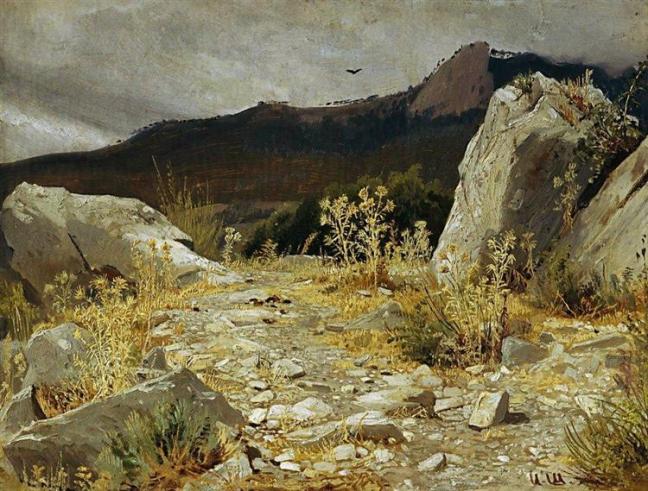 The question of the ‘spiritual path’ is a difficult one, that seems to draw different points of view and approaches, both from students and teachers. I have gathered here many quotes and pointers on and around this subject, from various spiritual teachers and poets of the eternal and the infinite. I hope that this will bring some clarity, or at least give a better overview of this ‘thing’ we call the Path… Yes, what path?

“How shall I cross the ocean of the world?
Where is the path?
What way must I follow?
I know not, Master.
Save me from the wound of the world’s pain.”
~ Adi Shankara

This is an excerpt of the famous discourse Krishnamurti gave in 1929 the day when he announced the dissolution of the Order of the Star, the organisation built around his person:
“I maintain that Truth is a pathless land, and you cannot approach it by any path whatsoever, by any religion, by any sect. That is my point of view, and I adhere to that absolutely and unconditionally. Truth, being limitless, unconditioned, unapproachable by any path whatsoever, cannot be organized; nor should any organization be formed to lead or to coerce people along any particular path. If you first understand that, then you will see how impossible it is to organize a belief. A belief is purely an individual matter, and you cannot and must not organize it. If you do, it becomes dead, crystallized; it becomes a creed, a sect, a religion, to be imposed on others. This is what everyone throughout the world is attempting to do. Truth is narrowed down and made a plaything for those who are weak, for those who are only momentarily discontented. Truth cannot be brought down, rather the individual must make the effort to ascend to it. You cannot bring the mountain-top to the valley. If you would attain to the mountain-top you must pass through the valley, climb the steeps, unafraid of the dangerous precipices.”
~ J. Krishnamurti

“In the direct approach the premise is that you are the truth, there is nothing to achieve. Every step to achieve something is going away from it. The “path,” which strictly speaking is not a path from somewhere to somewhere, is only to welcome, to be open to the truth, the I am. When you have once glimpsed your real nature it solicits you. There is therefore nothing to do, only be attuned to it as often as invited. There is not a single element of volition in this attuning. It is not the mind which attunes to the I am but the I am which absorbs the mind.”
~ Jean Klein

“The mind that seeks happiness is like a current in the ocean that longs for water. The mind that resists suffering is like a current in the ocean trying to escape from the water. See what happens to your longing and your suffering when this becomes clear. This understanding is the true alchemy, not the transformation of one experience into another, but rather the revelation of the true nature of all experience.”
~ Rupert Spira

Here is a reminder inspired from the words of Rupert Spira. The ‘fleeting entity’ is an expression he used to describe the separate self. It is necessary and terribly efficient to look into these matters for ourselves. This is why I like to share here the parts of a spiritual teaching that sounds like ‘something to do’, something to experiment and verify for ourselves:

‘Keep on looking in what way almost all your thoughts, feelings, activities, are based upon the belief that you are going to die… See that underneath all of that is your fear of disappearing…’

Further exploring on the subject:

“This imaginary identification of our self with an object, the body, creates the apparently separate self. … This apparently separate self, being made out of an intermittent object, is, by definition, unstable, always threatened with change, decay and disappearance. Hence the fear of disappearance that resides at its heart and its natural corollary, seeking.”
~ Rupert Spira

“Addiction of any sort, be it to inappropriate sexual behaviour, alcohol, drugs, smoking or any milder form of behaviour, almost always has its origin in the belief and, more importantly, the feeling of being a separate, limited, located self.”
~ Rupert Spira

“Fear and seeking manifest in the most innocuous forms of behaviour, the most common of which is unnecessary thinking, the almost constant mental chatter or commentary that most of us are familiar with. This innocuous commentary is the simplest form of the ‘resistance to what is’. It is the repetitive background chatter that ensures that attention is almost always diverted away from the immediacy, intimacy and simplicity of ‘what is’. This is the primal addiction.”
~ Rupert Spira

“Between living and death there is time. Time, that interval between what actually is and something which we call death, of which we are afraid. This interval between life and death is brought about by thought. Of course there is actual dying: the physical organism, through disease, accident, through usage, dies. But there is fear of death and the sorrow of death as a psychological ending. So there is not only the fear of physical dying, but also the fear of losing all the things that one has learnt, the memories, the experiences, the affections, the family, the hopes, the works, the character, all that one has developed, cultivated, nourished – fear of their coming to an end.”
~ J. Krishnamurti

“We cling when we fear that without identifying with something or as something, “myself” will lack substance entirely, rendering ordinary life devoid of meaning. Even a glimmer of the possibility of emptiness and meaninglessness can feel terrifying—like glimpsing a bottomless void into which one might fall forever. And of course we fear death which, although many attempt to hold it at bay with religion and spirituality, will mean the end of the entire self-centered production called ‘my life’.”
~ Robert Saltzman

That is the root of all suffering,

which our addictions seek to alleviate.”

– Artwork by Daniel B. Holeman

Suggestions:
– Fleeing to God (other pointers from the blog)
– A Day at Brockwood Park (Homage to J. Krishnamurti)