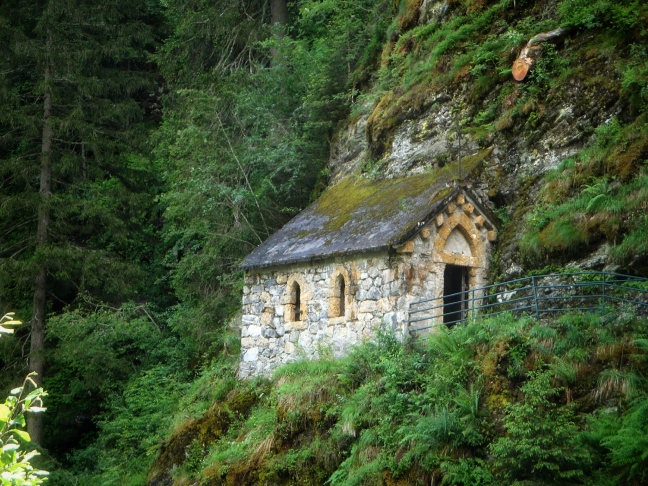 Continue wandering in search of your inner hermitage… (READ MORE…)

‘Girl Streched out on the Grass’ – Pierre-Auguste Renoir, 1890 – WikiArt

here was once a young girl of about ten years old, called Ishani. She lived on a mountain farm with her father. Her mother died a few years ago, and since then her father has grown bitter, hard, a gruff man. He started drinking, stopped seeing anybody, and forced his daughter to the same isolation. He wasn’t a bad man, but was saddened by the loss of his wife, and exasperated at not being able to communicate with his daughter.

Ishani had long black hair, and large greenish eyes. Martyred by her father who expected her to replace her mother with the chores of the house, she had become fearful and shy. She spoke faintly and her demeanour was hesitant. Yet, despite her misfortune, she has kept an angelic face and her innocence was intact.

Although still a little girl, Ishani was ahead of her age, because of the work and responsibility that fell on her, the suffering that went with it. As for her father, he was exasperated by Ishani’s silence and withdrawn attitude, by her lack of courage at work, her mistakes and forgetfulness. He could easily get angry, which further frightened Ishani. She no longer knew if she should hate him, submit, run away, feel guilty, or take pity on him. These two beings were caught in a spiral where each fed the other with his or her inability to break this burden. […]

A fairy story, about the inner quest of a little girl… (READ MORE…)

I’d like to share a particular side in Krishnamurti’s writing: his exquisite descriptions of nature. You find them in ‘Krishnamurti’s Notebook’ and in the three series of ‘Commentaries on Living’. They usually start a chapter, and are an opening to his inner observations. They are a testimony to his looking at the world in a way that is always new and fresh, uncontaminated by thoughts, by the past. They are an exemple of a non-dual apprehension of life, of nature, and of the thousands happenings.

“Again, it has been a clear, sunny day, with long shadows and sparkling leaves; the mountains were serene, solid and close; the sky was of an extraordinary blue, spotless and gentle. Shadows filled the earth; it was a morning for shadows, the little ones and the big ones, the long, lean ones and the fat satisfied ones, the squat homely one and the joyful, spritely ones. The roof-tops of the farms and the chalets shone like polished marble, the new and the old. There seemed to be a great rejoicing and shouting among the trees and meadows; they existed for each other and above them was heaven, not the man-made, with its tortures and hopes. And there was life, vast, splendid, throbbing and stretching in all directions. It was life, always young and always dangerous; life that never stayed, that wandered through the earth, indifferent, never leaving a mark, never asking or calling for anything.”
~ J. Krishnamurti
(‘Krishnamurti’s Notebook’ – August 21st, 1961 – Gstaad, Switzerland)

“Then, far away, came dawn. In the east there was spreading light, so young and pale, so quiet and timid; it came past those distant hills and it touched the towering mountains and the peaks. In groups and singly, the trees stood still, the aspen began to wake up and the stream shouted with joy. That white wall of a farm-house, facing west, became very white. Slowly, peacefully, almost begging it came and filled the land. Then the snow peaks began to glow, bright rose and the noises of the early morning began. Three crows flew across the sky, silently, all in the same direction; from far came the sound of a bell on a cow and still there was quiet. Then a car was coming up the hill and day began.”
~ J. Krishnamurti
(‘Krishnamurti’s Notebook’ – August 31st, 1961 – Gstaad, Switzerland)

“There wasn’t a cloud in the sky as the sun went down behind the hills; the air was still and not a leaf moved. Everything seemed held tight, in the light of a cloudless sky. The reflection of the evening light on a little stretch of water by the roadside was full of ecstatic energy and a little wildflower, by the wayside, was all life. There is a hill that looks like one of those ancient and ageless temples; it was purple, darker than violet, intense and vastly unconcerned; it was alive with an inward light, without shadow, and every rock and bush was shouting with joy.”
~ J. Krishnamurti
(‘Krishnamurti’s Notebook’ – November 9th, 1961 – Rishi Valley, India)

”Demand is born out of duality: ’I am unhappy and I must be happy’. In that very demand that I must be happy is unhappiness. When one makes an effort to be good, in that very goodness is evil. Everything affirmed contains its own opposite, and effort to overcome strengthens that against which it strives. When you demand an experience of truth or reality, that very demand is born out of your discontent with what is, and therefore the demand creates the opposite. And in the opposite there is what has been. So one must be free of this incessant demand, otherwise there will be no end to the corridor of duality. This means knowing yourself so completely that the mind is no longer seeking.”
~ J. Krishnamurti

Suggestions:
– Fleeing to God (other pointers from the blog)
– A Day at Brockwood Park (Homage to J. Krishnamurti)