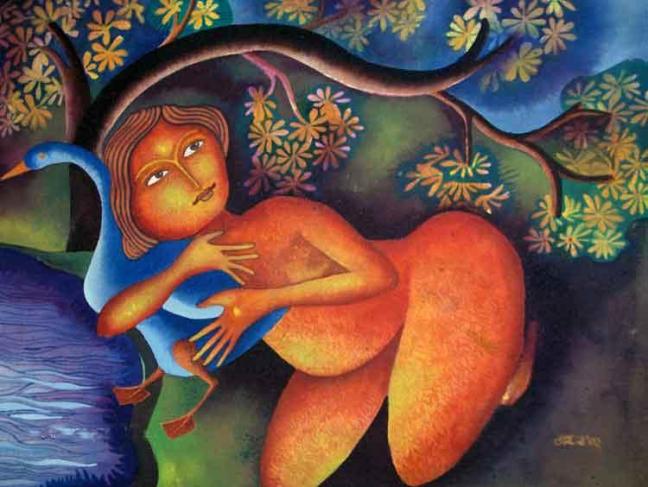 In the wake of the 14th century, Kashmir was an extraordinary place, at the crossroads of major religious influences: Kashmir Shaivism, Buddhism, Islam through the rise of Sufism, not forgetting the Vedantic tradition in place for centuries. Great political changes were taking place as the first Muslim rulers came into power. It was there, in a beautiful valley south-east of Srinagar, in the profuse nature of this area, close to the Himalayan mountains, that one of the brightest star of spiritual achievement was born. Her name: Lallā, which can be translated as ‘seeker’ or ‘darling’. Lallā, which Baba Dawud Mishkati would later present in these terms:

“In the cradle of the earth, absorbed in god, was she, Lalla Arifa, constantly aware.
She was one of those who wander in the wilderness of love wailing and lamenting (for the Beloved);
and she was a knower of the path of the valley of truth.”
~ Baba Dawud Mishkati (in 1654)

Lallā was born in a Brahmin family around 1320, close to Srinagar. It is said that she was married when she was twelve. She left to live nearby, with her in-laws family, as is the tradition in India. She had a good education and developed a strong spiritual interest even as a child. It is said that she was martyred by her mother-in-law, and that she was the target of many reproaches and critics, which lead her to become unhappy and resentful of her new family and husband. Probably some questions must have risen in her mind, due to her actual state of affairs and her growing religious inclinations:

“For ever we come, for ever we go;
For ever, day and night, we are on the move.
Whence we come, thither we go,
For ever in the round of birth and death,
From nothingness to nothingness.
But sure, a mystery here abides,
A Something is there for us to know.
(It cannot all be meaningless).”

“I will weep and weep for you, my Soul.
The world has caught you in its spell.
Though you cling to them with the anchor of steel,
Not even the shadow of the things you love
Will go with you when you are dead.
Why then have you forgot your own true Self?”