One day long ago, I was stopped on my way, redirected as it were. It was one morning, the time of a glorious encounter with the subtle ethers of a city. Nothing would ever be the same. But what did I know at the time?

In Benares I met the Ganges. But it wasn’t a river. It was something calm, placid, yet charged with a force and power that I had never met before. At night, the river was still not a river. It was an absence, an emptiness. It was dark. And the boats that were aligned on it were like suspended, resting, immobile, placed here by something I could never comprehend. And the waters met here secretly with silence, in the crystalline air where a bell breathed an occasional, happy tone.

In Benares I saw the sun rising. But it wasn’t a sun. It was a bath of golden light spread above the waters. It was giving and fresh like all illumination must be. It was a pointer reminding us tirelessly to turn our attention on ourselves. It was not taken for granted but received. You were being exposed, as all beliefs and limitations ought to be. And in the evening, its setting amongst the heartfelt notes of a devotional song would send shivers down your spine. Then you knew. You would come again tomorrow to be clothed by its golden light. And you couldn’t wait.

In Benares I met the dawn. But it wasn’t the dawn I knew. It was like the quivering of a new day forming itself above the shredded clouds of everything past. It was something incomparably fresh. And there was a sound to it. Something unheard yet tangible. Yes dawn was sound. And that sound was awakening itself, newness. It was sharp though, almost hurting if you let it go, didn’t engage in its flow. An airless wind was felt rising timidly above the thousands activities that were yet to blossom. Never could you feel with such acute awareness the birth and glory of a coming day.

In Benares I heard the bells ring. But they weren’t just bells ringing. They were wake up calls, openings to another hidden dimension, that would be met in a split of a second, and leave us changed, wondering at what had just happened. They were like space between two thoughts, special announcements of God’s presence. They were reminding you to just notice, or remember, what is just here, now. And they were vast – so vast! Coming from afar, solemn, dignified and playful at the same time. And you knew that everywhere above the river bank, temples awoke to puja and celebration. It really was touching your very soul.

In Benares I saw the cows. But they were nothing like cows. They were massive presence, untouched, unmoved. They were the rumination of the universe chewing itself, chewing the city away, stopping all activities still. And you wanted to touch them, to reach them, but were too afraid of what would happen. Of what would open itself now, in this moment, that you could reach, touch. You were afraid to be moved by it, chewed and ruminated. So you left it. Lost it. The cow had moved to grab yet another left banana peel, sure of her ground and position. A distant queen and the city goddess.

In Benares I met a few beggars. But they were not like the beggars I had seen before. They were Shiva in disguise, roaming here on a mission. You were prey for their simple gaze, catch for God’s graceful glance. It happened in a blink. But that gave rise to a vision so grand, that you could make it your home eternally. You were invited to a feast, your own special self. You were offered to grab the crooked hands of all that is undeserving in yourself, and that you deserved to see. But you missed it. Were left fiddling your pocket for a coin or two. Alas!

In Benares I took part in a street celebration. But it wasn’t just celebration. It was enchantment. It was a ritual reminiscent of ancient Vedic times, sharing the soma – the drink of eternity – around the fire of togetherness. It created a communion and an intimacy that enveloped everything, everyone, as in between four walls. The outside was locked inside, and the inside was mind. The whole celebration was indeed the celebration of our own self, of oneness. A clumsy brass band was playing amongst dances and flags as if playing heavenly music. Shiva was our guest for a blessed and ephemeral night.

In Benares I walked around the city. But it wasn’t quite a city. It wasn’t made of stone and dust, wasn’t standing on the earth amongst the hustle and bustle of human activity. Believe me, I saw the city plainly as if floating high above the ground, on Shiva’s trident. I could see that it hosted, encapsulated in its very own ethereal fabric, the meaning of beauty, love, and eternity. I could see the Ganges, the sun, the dawn, the bells, the cows, the beggars, the rickshaw wallahs, the celebration, the city, melting in the subtle nimbus of God’s infinite mind and presence. It was an enchanting vision. I left and took it all with myself. I wish I had noticed… 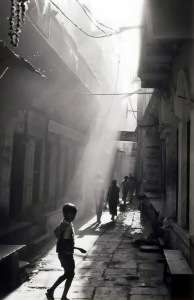 Text and photos by Alain Joly

– Suggestions:
– Bhārata Mā (an essay on the discovery of India’s spiritual heart)
– The Meeting (a short story that tells of an unexpected meeting)