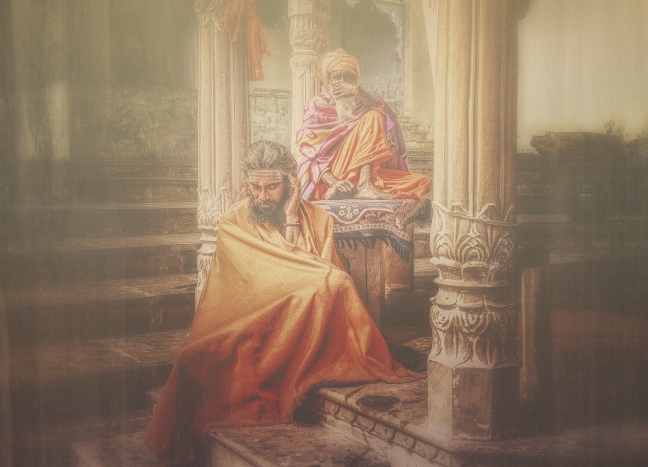 I’m sharing here the Ashtavakra Gita, in the translation of John Richards. This is a famous song and landmark of non-duality in India. It has been composed in Sanskrit as a dialogue between the eminent sage Ashtavakra and his brilliant disciple Janaka, also king of Mithila. It was allegedly written around the third Century BC although some scholars dated it in the eighth Century AD, at the period of Shankara. The author is unknown and the characters are borrowed from the ancient epics of India. ‘Ashtavakra’ means ‘eight bends’, for he has a deformed body. This is a short work of 300 verses, and was one of the favourites of Ramakrishna and Ramana Maharshi. In this dialogue, the process of enlightenment is easily dealt with, for Janaka is, in Ramesh Balsekar’s words, “a superbly ‘ripe’ disciple, one who is just waiting for that one quick spark of initiation into Truth that brings about sudden enlightenment.” The dialogue quickly moves to be an exposition of truth by two equally enlightened beings. Yet, a process is here at work, between the guru and his disciple, between truth and the slow movement towards full understanding, between the one reality and the many roads and aspects that lead to a total and definitive grasp of it…

“Your real nature is as the one perfect, free,
and actionless consciousness, the all-pervading witness
– unattached to anything, desireless and at peace.
It is from illusion that you seem to be involved in samsara.”

How is knowledge to be acquired? How is liberation to be attained? And how is dispassion to be reached? Tell me this, sir.

If you are seeking liberation, my son, shun the objects of the senses like poison. Practise tolerance, sincerity, compassion, contentment and truthfulness like nectar.

You are neither earth, water, fire, air or even ether. For liberation know yourself as consisting of consciousness, the witness of these.

If only you will remain resting in consciousness, seeing yourself as distinct from the body, then even now you will become happy, peaceful and free from bonds.

You do not belong to the brahmin or any other caste, you are not at any stage, nor are you anything that the eye can see. You are unattached and formless, the witness of everything – so be happy.

Righteousness and unrighteousness, pleasure and pain are purely of the mind and are no concern of yours. You are neither the doer nor the reaper of the consequences, so you are always free.

You are the one witness of everything, and are always totally free. The cause of your bondage is that you see the witness as something other than this.

2 thoughts on “The Song of Ashtavakra”